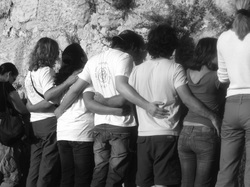 Children have been defined as "at-risk" by meeting a variety of circumstances.
These are circumstances are: the absence of either or both parents from the household
the child resides in; at least one foreign-born parent of recent immigration; low family income; the absence of any employed parent or guardian in the household; the child having at least one disability; being retained in grade at least once; or speaks English less than “very well”. Measures of community risk might include rates of poverty, crime, unemployment, or teen parenthood in the community.

Abuse, neglect, and dependency often become generational. According to the latest reports from the Child Welfare League of America published in 2017:
https://www.cwla.org/wp-content/uploads/2017/03/NORTH-CAROLINA.pdf
Reducing social isolation; creating supportive social networks; teaching appropriate behaviors and stress responses; developing relationship skills; providing a platform of faith or inner peace; and developing an awareness of self and individual worth are core elements of Seeds of Hope programming developed to combat the perpetuation of the cycles of abuse, neglect, dependency, and poverty. Since our inception, this continues to be our driving objective. It is our goal to teach our children we are each made for greatness.
Statistics show mentors help keep students in school. Students who meet regularly with their mentors are 52% less likely than their peers to skip a day of school and 37% less likely to skip a class (Public/Private Ventures study of Big Brothers Big Sisters). Mentors help improve a young person's self-esteem. Mentors provide support for students trying new behaviors. Youth who meet regularly with their mentors are 46% less likely than their peers to start using illegal drugs and 27% less likely to start drinking (Public/Private Ventures study of Big Brothers Big Sisters). About 40% of a teenager's waking hours are spent without companionship or supervision. Mentors provide teens with a valuable place to spend free time. Mentors teach young people how to relate well to all kinds of people and help them strengthen communication skills.
An estimated 1 in 8 Americans were food insecure, equating to 40 million Americans including more than 12 million children. [Alisha Coleman-Jensen, Matthew P. Rabbitt, Christian A. Gregory, and Anita Singh. 2018. Household Food Security in the United States in 2017, ERR-256, U.S. Department of Agriculture, Economic Research Service]. The U.S. Department of Agriculture (USDA) defines food insecurity as a lack of consistent access to enough food for an active, healthy life. It is important to know that hunger and food insecurity are closely related, but distinct, concepts. Hunger refers to a personal, physical sensation of discomfort, while food insecurity refers to a lack of available financial resources for food at the level of the household.